Welcome to the new normal - click here to know more.

Rameswaram (also spelt as Ramesvaram, Rameshwaram) is a town and municipality in the Ramanathapuram district of the Indian state of Tamil Nadu. It is on the Pamban Island separated from mainland India by the Pamban channel and is about 40 kilometres from Mannar Island, Sri Lanka. It is in the Gulf of Mannar, at the tip of the Indian peninsula. Pamban Island, also known as Rameswaram Island, is connected to mainland India by the Pamban Bridge. Rameswaram is the terminus of the railway line from Chennai and Madurai. Together with Varanasi, it is considered to be one of the holiest places in India for Hindus, and part of the Char Dham pilgrimage.

It has been written in the Ramayana that the Divine King Rama built a bridge with Hanuman's help from across the sea to Lanka to rescue his wife Sita from her abductor Ravana. The Ramanathaswamy Temple, dedicated to the Vedic god Shiva, is at the centre of the town and is closely associated with Rama. The temple and the town are considered a holy pilgrimage site for Shaivas.

Rameswaram is the closest point from which to reach Sri Lanka from India, and geological evidence suggests that the Rama Sethu was a former land connection between India and Sri Lanka[citation needed]. The town has been in the news over the Sethusamudram Shipping Canal Project, Kachchatheevu, Sri Lankan Tamil refugees and capturing local fishermen for alleged cross-border activities by Sri Lankan Forces. Rameswaram is administered by a municipality established in 1994. The town covers an area of 53 km2 (20 sq mi) and had a population of 44,856 as of 2011. Tourism and fishery employ the majority of the workforce in Rameswaram. 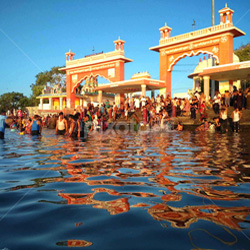 Dhanushkodi Beach lies on the tip of the Rameswaram island. On this beach, the Bay of Bengal and the Indian Ocean merge and is known as Arichal Munai in Tamil. The Dhanushkodi Beach attracted thousands of tourists each day. 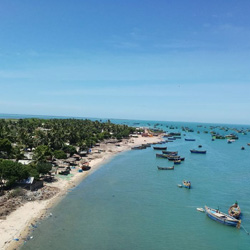 Pamban Bridge is a railway bridge which connects the town of Rameswaram on the Pamban Island to mainland India. Opened on 24 February 1914, it was India's first sea bridge, and was the longest sea bridge in India until the opening of the Bandra-Worli Sea Link in 2010. 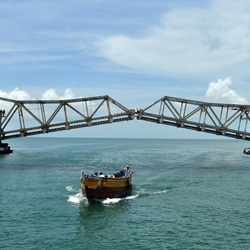 The temple is one of the most famous pilgrimage sites and has several historical references about it. The Maratha kings who ruled Thanjavur established chatrams or rest houses throughout Mayiladuthurai and Rameswaram between 1745 and 1837 CE and donated them to the temple. 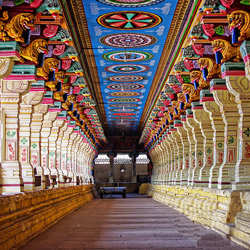